The Crew From Attack On Titan Roamed The Halls

My youngest had her last Halloween Parade at school today.  Bitter sweet.

The adorable, tiny years of wanting to be a Princess have passed and now we're into Anime and Manga characters.  Lily is a big fan of the anime Attack of Titan.  (Anime is the cartoon version. Manga is the print version. You're welcome ;->)  Luckily two of her friends like the same anime so they decided to become -  Eren Yeager, his adopted sister Mikasa Ackerman and their friend Armin Arlert. 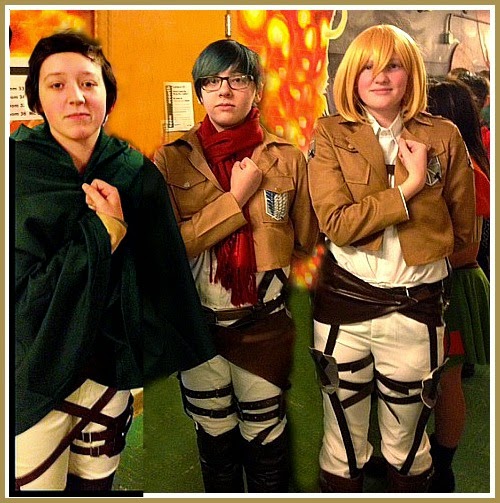 Lily is donning a wig - and yes, the bangs need to hang in front of her face (drives me crazy but hey, it's not everyday) while her friends made the move and truly cut and/or colored their hair to resemble their character.  Have you heard the term "CosPlay"?  This is it.

On Halloween night they plan to roam the streets, attacking Titans and claiming as much candy as their pillowcases can hold.  Are your kids dressing up this year?  What are they going as?