Did I Catch Him At A Bad Time? Or Is This His Normal? 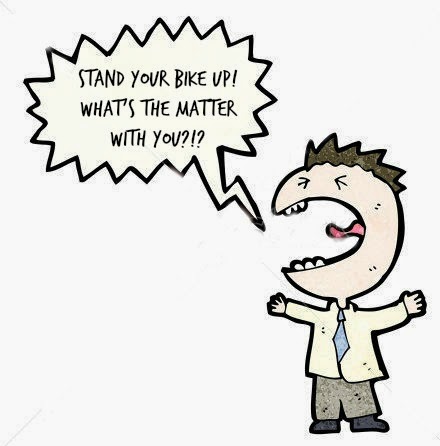 This was being shouted by a grown man to a young boy as my husband, my 13 year old daughter and I were walking into, what is normally, a mellow neighborhood pizza place.  Apparently this man didn't like the fact that this boy had pizza grease on his hands. He didn't like a young child taking his time eating. He didn't like a young child riding their bike in circles. And I definitely didn't take kindly to his constant verbal assault which, whether this man realized it or even cared, was really pissing me off.

A quick scan of the outdoor seating space showed a father, sitting on top of a picnic table, holding court over 4 young children.  Every move they made he yelled at them.  "Pick up that napkin!"  "Why'd you pour that water on the ground?!  It will pool and bugs will come around where people eat!  What were you thinkin'?!!"  A weak "Sorry dad" was the response. The more I heard the more agitated I became. I made a move, not really sure what would come of it, but I had to do... something.

I picked up my drink and went over to the area where this man was bellowing.  I sat at a table near by.  I wanted to see if he would continue at the volume, and intensity, if an adult was close. I looked at the children, they looked at me. I watched their faces as they heard his voice. More words of "What's the matter with you?!" and "Use your brain!!" This time not as loud, but still, the anger is there.

Here's the thing, I interpret this father's behavior as anger. Does he see it as good parenting?  If someone's yelling at you are you truly listening to what they're saying? Or are you scrambling in your brain, and body, trying to think of ways to make the yelling stop? Of course this isn't the first time I've heard a parent yell. I'm guilty of losing it too. It's just that we were at a sweet, laid-back neighborhood pizza place and his intensity took over the whole space.  It's like he wanted an audience.  As if to say, "Look at what I can do!"  Well &%$! that - is what I hope I conveyed.

Should I say something?  What would I say?  The man knew I was there and started talking lower and lower.  The daughter tried to bring her dad's attention to her broken kickstand but he kept mumbling "Why don't you think?!"  I was hoping he was talking to himself.

As the last pizza crust was consumed, I went back to my table with Rob and Lily. Just then a man and a woman sat beside us and turned to see this father get on a bike and rally his kids behind him on their bikes.  As the 5 of them rode down the sidewalk this woman applauded him and said "He's so brave.  4 kids on bikes?  I'd be a nervous wreck."  Sometimes, to be perceived as a good parent, it's all in the editing.

Should I have said something?